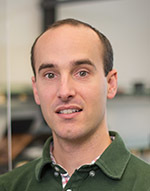 Julien Bachmann joined the FAU as an Associate Professor in 2012. He was promoted by FAU to a Full Professor position in 2017, and he now leads the newly created chair “Chemistry of Thin Film Materials”, which will participate in EAM’s Interdisciplinary Center for Nanostructured Films. Julien has been a member of EAM since 2012. He obtained an EAM Starting Grant in 2013, and an ERC Consolidator Grant in 2015.

Julien Bachmann studied molecular chemistry at the University of Lausanne in Switzerland (Diploma 2001) and at the Massachusetts Institute of Technology in the United States (Ph. D. 2006). He then moved to Germany as an Alexander von Humboldt Fellow and explored another field of science relevant to energy conversion, namely solid-state physics, at the Max Planck Institute of Microstructure Physics in Halle and the University of Hamburg. He started his independent research in 2009 as a Junior Professor in Hamburg. The Research in the Bachmann group focuses on nanostructured inorganic interfaces, methods for their preparation, and the influence of their geometric parameters on their chemical and physical properties. The long-term impact of this work shall be the replacement of expensive, rare, ultrapure and/or toxic materials used for the conversion and storage of renewable energy with more practically appealing alternatives.