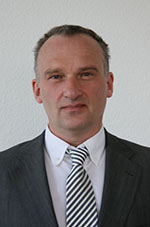 The Institute for Multiscale Simulation of Particulate Systems was the first EAM funded institute to be appointed in December 2008. The institute headed by Thorsten Pöschel was created to strengthen the Cluster’s expertise in Modeling and Simulation.
In particular, the focus of his research is the relation between nanoscale and microscale particle properties on the one hand and macroscopic material characteristics on the other. In EAM, he studies this multi-scale problem by means of numerical simulations on the relevant length and time scales, using a variety of numerical approaches.
Thorsten Pöschel studied Physics at the University of Chemnitz and at the Electrotechnical Institute in St. Petersburg (Russia). He graduated from the Humboldt University in Berlin with a PhD in Theoretical Physics, and at the University of Dresden he obtained the degree of Doctor in Engineering in the field of Electronics. From 1990 to 2000 he worked as a research assistant at the Humboldt University in Berlin, from 2000 to 2007 as an assistant professor for Biophysics and Bioinformatics at the Charité in Berlin. During this period he assumed post doctorate positions at a number of academic institutions, including Saarland University, the University of Chicago, John von Neumann Institute for Computing in Jülich, ESPCI ParisTech in Paris, the University of Stuttgart, the University of California, Santa Barbara as well as a visiting professorship in Puebla, Mexico. Prior to his appointment at the University of Erlangen-Nürnberg and EAM, he had been Professor for Theoretical Physics at the University of Bayreuth.