Quite a turnaround: What microrobots have in common with soap

Quite a turnaround: What microrobots have in common with soap

You need soap to remove dirt from your skin. The surfactant molecules it contains squeeze their way into the surface area between the dirt and the skin and help to dissolve the dirt in water. Researchers at FAU and Heinrich-Heine-Universität Düsseldorf (HHU) have observed the same phenomenon with rotating microrobots. Microrobots rotating in a clockwise direction separate from those rotating in an anticlockwise direction to form two cohesive groups clearly separated from each other, just like water and oil. By linking the microrobots to make chains, researchers were able to observe various effects: the chains are capable of mixing the groups and acting like surfactants to create new structures, the same as happens with soap and soap bubbles. 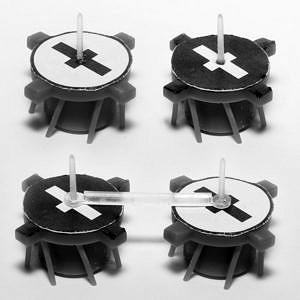 The miniature robots from a 3D printer that start to rotate when placed on a vibrating disk; the angle of their legs determines the direction of rotation. The lower image shows two robots that rotate in opposite directions linked together. (Image: HHU/Christian Scholz)

The microrobots are produced using 3D printers, are one centimetre in size and weigh one gram. The angle of their seven legs determines which direction they turn. The microrobots are placed on a vibrating disk to make them start to rotate, and move together to form groups of robots all rotating in the same direction. Tension between the groups prevents them from mixing. By forming different chains of microrobots, the researchers carried out experiments to find out how to dissolve the boundary between the robots rotating in a clockwise and those rotating in an anti-clockwise direction in this simulation and then mix the groups anew.

If the chain is formed from two strands of robots rotating in different directions, the chain actively moves along the boundary line between the two groups. ‘They surf at great speed along the surface, which enables them to meet their purpose of reducing surface tension much more effectively,’ says Dr. Christian Scholz, who conducted the experiments at the Institute of Theoretical Physics at Heinrich-Heine-Universität Düsseldorf. By reducing tension at the boundary, the robots make it easier for the groups to mix. If the chain only consists of one strand with robots rotating in different directions, the rotation causes both ends of the chain to meet and form a circle. Under certain circumstances, this creates new structures which the researchers refer to as ‘rotelles’. The word rotelle is a combination of the words rotate and micelle, and also means ‘small wheel’ in Latin. ‘Rotelles are like soap bubbles, a type of micelle, which additionally rotate on their own axis,’ explains the Head of Institute at HHU, Prof. Dr. Hartmut Löwen.

Providing energy to the microrobot chains and setting them in motion makes them act in the same way as surfactants. The robots can therefore be classed as active surfactants, which can be switched off or stopped from working at any time by cutting the source of energy via the vibrating disk. Comprehensive model simulations conducted by physicists at FAU were helpful for demonstrating this phenomenon. ‘The simulations allow us to vary the length of the chains or the connections between the chains and various robots to search specifically for this new state,’ explains Prof. Dr. Thorsten Pöschel from the Institute of Multiscale Simulation at FAU in Erlangen.

In future, this property of microrobot chains could help to clean water which has been polluted with oil by using chains to circle the oil and make it easier to skim it off the surface. It could also help reduce the environmental impact of traditional surfactants. At the moment, these areas of application are only hypothetical, however. In order to solve tasks at the micrometre scale, the researchers will have to scale down their construction even further. Instead of being one centimetre in size, robots would then need to be between 0.0001 and 0.00001 centimetres in size. ‘Miniaturisation of this scale would, however, also have an effect on the physical effects. Understanding and exploiting the differences in forming structures at different scales is very exciting,’ explains Prof. Michael Engel from the Institute of Multiscale Simulation at FAU.